Think Loudly was a series of bumpers that aired on Noggin from 1999 to 2002. Most of them are short interviews with kids speaking out about what they think is important in the world.

Unlike most of Noggin's bumpers, the segments are in a widescreen format to give them the look of real interviews. Most of the bumpers feature short blurbs from an array of kids, while a few are focused on just one kid's thoughts.

There were two different intro sequences for this series. The first one was used from 1999 to 2000. In it, an animated girl floats around a city wearing a rainbow beanie hat. She thinks of different objects with big mouths added onto them, and a Noggin logo with a beanie hat appears.

The second intro was used from 2001 to 2002. It starts with a sound effect of someone clearing their throat, about to speak up about something. A Noggin logo appears with arrows popping out of it, and the words "Think Loudly" pop up.

This is an unfinished list and will be updated when more episodes are available. 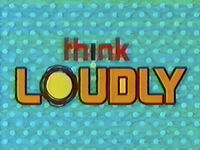