A Walk in Your Shoes

A Walk in Your Shoes

A Walk in Your Shoes is an original series created by Noggin. It started as a series of three shorts that aired during Phred on Your Head Show in 1999. It was later developed into a long-form series. It ran for 42 long-form episodes.

"A Walk in Your Shoes takes two real people from completely different backgrounds and switches their lives, physically transplanting them into each other’s environments while the cameras roll. As the subjects express their thoughts and impressions on camera and in online diaries on noggin.com, they learn to appreciate diverse perspectives and get a firsthand look at how people from different backgrounds and experiences see the world." (source)

A Walk in Your Shoes was one of two Noggin shows, along with Oobi, to develop from a short-form series into a long-form one. The show was produced by Noggin in association with Dancing Toad Productions, a New York studio that also worked on another show for Noggin: Girls v. Boys.

Each episode documents the experiences of two different people who switch places for a day and learn how the other person lives. As the two subjects express their thoughts and impressions on camera, as well as in online diaries on Noggin's website, they learn to appreciate diverse perspectives. The show was designed to help viewers get a first-hand look at how people from different backgrounds and perspectives see the world.

The show had 42 long-form episodes and three shorts. See the page A Walk in Your Shoes episodes for a full list of episodes, with pictures and summaries. 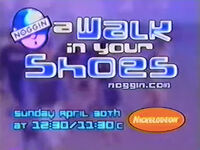 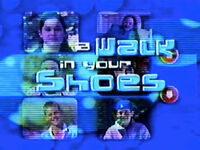 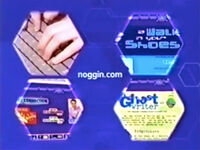 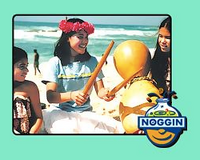 Press photo for the Hawaii episode 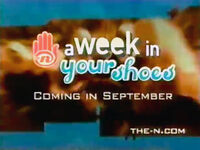 A "Week" in Your Shoes promo (during The N block)

Photos for the Teen Parent episode